Did You Know? Metropolitan Jazz Orchestra and MOMIX 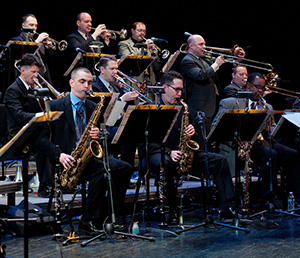 See the Metropolitan Jazz Orchestra on Saturday, January 26, at 8 p.m.

The Metropolitan Jazz Orchestra brings the show Benny and Beyond to the Center for the Arts on Saturday, January 26, at 8 p.m. The program pays homage to Benny Goodman, legendary band leader and clarinetist-composer, who during the 1930s and 1940s had numerous hit singles, including “Let’s Dance,” “Don’t Be That Way,” “Somebody Stole My Gal,” and many, many more. The Metropolitan Jazz Orchestra is led by Artistic Director and alto sax virtuoso Jim Carroll and features clarinetist Eddie Daniels who has thrilled audiences and critics alike for over 50 years with accolades for his masterful playing in classical and jazz idioms.

DID YOU KNOW ... Jim Carroll is the founder of the Metropolitan Jazz Orchestra? He is a professor at George Mason University’s School of Music where he teaches various courses on jazz history, jazz ensembles, introduction to jazz improvisation, and other topics in Jazz studies. While at Mason, Carroll founded the Metropolitan Jazz Orchestra, a resident company at Mason’s Center for the Arts.

DID YOU KNOW ... considered to be one of the most skilled and versatile jazz performers, Carroll has shared the spotlight with the likes of Woody Herman, Billy Taylor, Maynard Ferguson, Nancy Wilson, Michael Jackson, as well as the renowned Smithsonian Jazz Masterworks Orchestra? Carroll also worked in collaboration with legendary jazz artist Sonny Rollins whose performance and arrangement of The Ballgame can often be heard in the main entrance of the Washington D.C. National’s Park.

DID YOU KNOW ... Jim Carroll completed his graduate and undergraduate training under the guidance of Eugene Rousseau and David Baker at Indiana University? He received his undergraduate training with a major in saxophone performance, while his masters training focused on jazz and woodwinds. He is active as a jazz educator, having taught at several universities. He has been a charter member of the Smithsonian Jazz Masterworks Orchestra, the orchestra-in-residence at the Smithsonian's National Museum of American History, since the early 1990s, recording, touring, and performing with the group until 1999 when he joined George Mason University.

DID YOU KNOW ... at age 76, Eddie Daniels isn’t just one of the great jazz clarinetists but also a classical virtuoso, celebrated as much for his astonishing technique as for the expressiveness of his playing in both worlds? A first-rate sideman in a variety of genres, he’s worked with Freddie Hubbard, Billy Joel, and Bucky Pizzarelli, among many others. He’s had classical works written for him—Daniel Schnyder’s MATRIX 21, a concerto for clarinet and orchestra, for instance—and some of his own compositions appear on his long string of albums.

DID YOU KNOW ... Eddie Daniels began his musical career on saxophone not clarinet? Then on a Monday night in the spring of 1967, playing with the Thad Jones/Mel Lewis Orchestra, in the early days of its residency at the legendary New York jazz club the “Village Vanguard,” Eddie was struck with the sudden inspiration to take a solo on clarinet—even though he was expected to play tenor saxophone. Daniels said, “I totally surprised everyone, including myself, because it was recorded live. Later on, Mel told me that Thad had said to him, ‘What the hell did he do that for?’ But then, he loved the solo.”

DID YOU KNOW ... The critics at “DownBeat” were also taken with the solo, giving Daniels the New Star on Clarinet award in 1968 solely on the strength of those 32 bars of exuberant inside-outside lines, as memorialized on the 1967 Thad Jones/Mel Lewis album Live at the Village Vanguard?  But it wasn’t until the 1980s that Daniels shifted his focus almost entirely to the clarinet, where it has since remained.

MOMIX Dance Company presents Opus Cactus at George Mason University’s Center for the Arts on Friday, January 25, at 8 p.m. Known internationally for presenting works of astounding inventiveness and physical beauty, MOMIX is a company of dancer-illusionists founded and directed by Moses Pendleton. Each production focuses not only on the beauty of the human form, but also the beauty of nature, music, scenography, and life itself.

DID YOU KNOW ... MOMIX's productions are carefully crafted to assimilate a multitude of various elements in each show? Pendleton combines his sculpted dancers with unique costumes and props, sets them amongst artfully created lighting and effects, and finally completes everything with a personally selected diverse musical score, ranging from Vivaldi to New Age to birdsong. MOMIX presents works that combine acrobatics, dance, gymnastics, mime, props, and film in a theatrical setting. The company has successfully toured internationally, performing on five continents.

DID YOU KNOW ... In Opus Cactus, Moses Pendleton brings the landscape of the American Southwest to life with his signature illusionistic style creating dynamic images of cactuses, slithering lizards, and fire dancers? Originally created as a 20-minute piece in 2001 for the Ballet Arizona, Opus Cactus was then expanded into a full-evening work.

DID YOU KNOW ... Moses Pendleton has been one of America’s most innovative and widely performed choreographers and directors for over 40 years? He has worked extensively in film, TV, and opera, and as a choreographer for ballet companies and special events, including choreographing the Closing Ceremonies of the Winter Olympics at Lake Placid in 1980.

DID YOU KNOW ... Pendleton was a co-founder of the ground-breaking Pilobolus Dance Theater in 1971? Pilobolus began touring immediately and the group shot to fame in the1970’s, performing on Broadway under the sponsorship of Pierre Cardin, touring internationally, and appearing in PBS’s Dance in America and Great Performances series.  By the end of the decade, Pendleton had begun to work outside of Pilobolus, performing in and serving as principal choreographer for the Paris Opera’s Integrale Erik Satie in 1979.  Pendleton formed his own company, MOMIX, in 1980. MOMIX rapidly established an international reputation for highly inventive and often illusionistic choreography.

DID YOU KNOW ... Pendleton was born and raised on a dairy farm in Northern Vermont? His earliest experiences as a showman came from exhibiting his family’s dairy cows at the Caledonian County Fair. He received his BA in English Literature from Dartmouth College in 1971

DID YOU KNOW ... MOMIX the Dance Company, based in Washington, Connecticut, is named after a solo, "Momix," that Pendleton created for the 1980 Winter Olympics? Momix is also the name of a milk supplement fed to veal calves. Do you suppose there could be a connection between the name MOMIX and Pendleton’s early life on a farm?