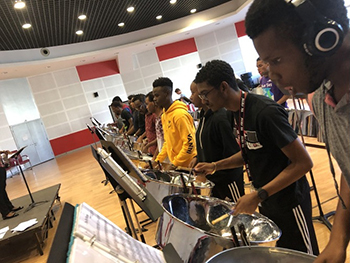 In February 2019, nine students from Mason's School of Music participated in one of the world's largest and most extravagant music competitions. Students from the Jazz and Percussion departments traveled to Trinidad with Professor Victor Provost, to compete in the National Panorama competition—a contest of hundreds of steel bands and thousands of performers.

Ronald Lee, Cory Haley, Domenic Lewis, Angel Bethea, Nelly Solares, Adam Schuman and Eljhaie Brathwaite performed with the Arima Angel Harps steel band in the medium category, while David Singhaus (who assisted in organizing the trip) and Kendell Haywood performed with Silver Stars Steel Orchestra in the large band category. Recent Mason graduate Aviel Scanterbury was the arranger (musical director) for Angel Harps and Liam Teague—known as "the Paganini of the steel pan"—arranged for Silver Stars. It is important to understand that the job of a Panorama arranger is coveted, revered, and critiqued as closely as an NFL quarterback during the Super Bowl!

Throughout the week, the students toured the island nation, visiting Maracas Beach, the ancient "Pitch Lake", and The Temple By the Sea, and sat in on classes and lessons at the University of Trinidad and Tobago.

During an in-depth workshop by master steel pan artisan builder and tuner Ronald Mathews, students learned the science and craft behind the construction of the only family of acoustic instruments invented in the 20th Century.

Daily, they were treated to local Trinidadian cuisine including corn soup, bake and shark, doubles, and roti. Each night was spent in rigorous rehearsals at the respective "pan yards"—often lasting until after midnight—in preparation for the Semi-Final performance round on Sunday the February 17th. Angel Harps finished just below the 10th place cut-off required to move on to the Final round, landing in the 12th spot. A great disappointment for sure, but a tremendous experience nonetheless. Silver Stars fared better, finishing 7th in their category and advancing to the Final round of the competition (to be held March 2nd, 2019).

Three of the Mason steel pan contestants in Trinidad