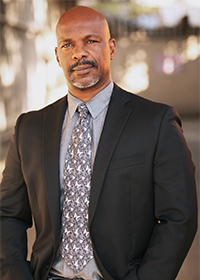 In March, Film at Mason students will work directly on set with Spearman for three days to produce the short film Langley Park. During the shoot they will gain professional crew experience and build their producing skills, crew credits, and technical expertise. Written by and starring Spearman, Langley Park follows a man returning to his childhood home to arrange his mother’s funeral. “It's an ode to the very special relationship gay sons have with their mothers. I think seeing an older gay man, not in the ‘daddy’ role or as forgotten is really important. We have to see people age and go through the things that happen when you lose a parent,” says Spearman.

We had the chance to connect with Spearman to discuss his strategy and goals for Film at Mason students and the upcoming Langley Park shoot. Here’s what he had to share.

What production knowledge are you most excited to teach and share with Mason students during the shoot?

Good set etiquette. It's so important to understand that when you're on a set you're an artist and a craftsperson, but you're also a cog in a machine that is working very hard and very fast.

How do you plan to engage and manage the 30+ students who are working set?

With as much grace and composure as I can. I want them to be able to ask questions and contribute and at the same time understand that the goal is to make the day, no matter what.  To that end, I've Skyped into their classes early in the semester, and will come to Mason weeks before the shoot so we can build a vocabulary.

Mason Film Lab is an ambitious program and shoot. Why is it important to get students out of the classroom and onto real world sets?

It's one thing to dream something up and another to face the realities of doing it — i.e., the stuff that happens on location. It doesn't rain in classrooms. The neighbor’s dog doesn't bark in classrooms while you're recording.

How will this shoot help prepare Mason students for a future in filmmaking?

Working with teachers, cinematographers, and directors who are all still working in the industry helps a lot. I'm really impressed with the fact that the faculty is still working on projects outside of the school. What they bring back helps a lot. I'm also going to lean on the students to bring their best over these two days — something they'd be asked for on any set, anywhere in the world.

Created by Cinematography Professor Hans Charles and Producing Professor Lisa Thrasher in 2015, the Mason Film Lab is a sustained educational opportunity for Film at Mason students that presents great challenges and yields tremendous student growth. While the students learn the underlying goals, concepts, and the craft of filmmaking in the classroom, through Mason Film Lab students understand through practice. They work within the professional protocols of our industry, meet deadlines, work in teams in cinematography, sound and producing, are accountable to resolve mistakes made as they learn by doing, and develop their on-set muscle memory. In the original incarnation of Mason Film Lab, students worked on scenes. Then in its second year, Mason Film Lab students ambitiously supported the production of an entire short film with a Guest Director. Guest Directors have included Nefertite Nguvu, Professor Giovanna Chesler, and Colette Burson. These filmmakers have brought unique and important stories to screen, taking artistic leaps of their own through the films. Each Mason Film Lab film has screened internationally in film festivals, won awards, and garnered students crew credits they use when applying to jobs in our field.