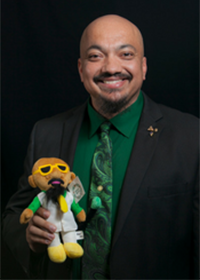 Serving as Director of Campus Life Ensembles and Collaborative Arts, and as an Associate Professor of Music, Dr. Michael W. Nickens (a.k.a. Doc Nix) is most recognized as the leader of the “Green Machine”, which in 2015 was named the #1 pep band in college basketball by the NCAA and commended by the Senate and House of Delegates of the Commonwealth of Virginia. In addition, Dr. Nickens launched Mason’s fife and drum corps and WGI world-champion drumline, and oversees Mason’s winterguard. This collection of performing units, known as the “Green Machine Ensembles”, are internationally known for their thrilling, high-energy performances at Mason ceremonies and basketball games, professional sports games and events (Capitals, Nationals, Wizards, and Redskins), community events (Celebrate Fairfax, and the Nike Womens’ Half Marathon), and marching competitions, as well as their popular internet videos that have over 100 million views collectively.

Dr. Nickens was named the 2016 Faculty Member of the Year by the George Mason University Alumni Association. He served as a Faculty Representative to the Board of Visitors, Chair of the Faculty of the College of Visual and Performing Arts, Chair of the CVPA  Diversity Committee, and as a member of the School of Music’s Graduate Committee. Having joined the faculty of Mason’s School of Music in fall 2006, he has taught courses in sight-singing/ear training, popular music in America, improvisatory music, brass methods, applied tuba, composition, chamber music, and jazz improvisation, as well as collaborations with Mason’s School of Dance. In addition, he was a co-founder and co-conductor of the Colonial Athletic Association’s “Breakfast with the Bands” intercollegiate pep band showcase.

During summers, he has taught tuba and euphonium, conducting, jazz performance, composition, improvisation, chamber music, large ensemble performance, and theory at the Performing Arts Institute at Wyoming Seminary in Kingston, Pennsylvania, the Music, Art, and Theatre (MAT) Camp in Evanston, Wyoming, and the Northern Arizona University Music Camp in Flagstaff, Arizona, and at Mason’s Potomac Arts Academy.  He has also coached a professional marching ensemble, “Mix It Up”, at Busch Gardens in Williamsburg, Virginia.

Dr. Nickens was born in Washington DC and grew up in the Fairfax County Public Schools in Alexandria, Virginia. He completed his academic degrees from the Manhattan School of Music, Yale University, and the University of Michigan.