The College of Visual and Performing Arts' annual Arts, Media, and Design Internship and Career Fair offers a special opportunity for students and alumni to network with the top arts, entertainment and media employers in the District of Columbia, Maryland and Virginia. The expo-style event, held each February, includes booths staffed by recruiters from such employers as PBS, John F. Kennedy Center for the Performing Arts, Joy of Motion Dance Center, American Film Institute and Shakespeare Theatre Company, Workhouse Art Center, and Live Nation, among others. The event also includes a series of presentations and Q&A sessions on special topics related to professional development in the visual and performing arts. Past sessions have included such topics as crowdfunding and how to apply visual and performing arts degrees in sectors outside the arts. For more information, contact Ryan Braaten, Assistant Director of Development, at 703-993-8641 or rbraaten@gmu.edu.

The George Mason University Alumni Association’s annual Celebration of Distinction dinner and award reception recognizes a distinguished alumnus/alumna from each of Mason’s academic units. Each Spring, the College of Visual and Performing Arts awards the Thomas W. Iszard III Distinguished Alumni Award at this event to an alumnus/alumna in recognition of their professional accomplishments and service to the university. 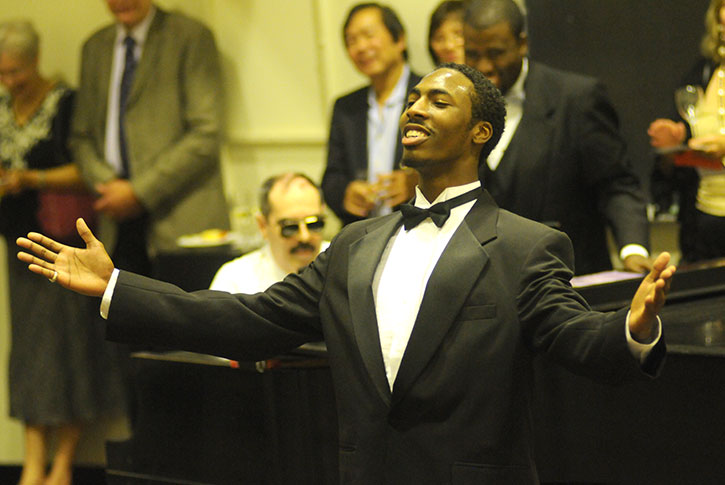 Each September, the seven academic disciplines in the College of Visual and Performing arts join forces to present the annual ARTS by George! benefit to raise funds for student scholarships and the Great Performances at Mason series. Students and faculty from each discipline collaborate in a series of behind-the-scenes showcase performances and exhibits in open studios and rehearsal halls of the deLaski Performing Arts Building. The event includes wine and restaurant stations from top restaurants in the Washington, D.C., region, as well as a Silent Auction of arts-related items and experiences. The evening culminates in a gala performance by a headliner in the Concert Hall, followed by an on-stage champagne and dessert reception with the artist. The annual event has collectively raised more than $1 million since it began in 2006.