I chose to come to Mason because the theater program trains their students to be well rounded performers. At Mason, I am and will be able to take classes in film, Shakespeare, dance, stage combat, and many others. I also chose Mason because of its proximity to DC, which provides me with many theatrical opportunities.

Scholarships have relieved the tremendous stress that comes with paying for college tuition. Due to the scholarships I have received, I have been able to pay for my first year of college without going into debt.

I was so lucky to be part of Mason’s Film program. Having professors that all work in the industry and teach with real life experiences is incredible for students and few schools have that to offer. I loved the program because it was very hands on and I was constantly creating, but most importantly we are not only given the platform and tools to create, but allowed to have a voice and tell the stories that we care about. Going to Mason was the best decision I ever made.

Scholarships had a tremendous impact on my life! It was nice to not worry so much financially and focus on my creativity. Having scholarships also lit a spark of urgency for me to do well because others believed in me and I couldn't let them down. When I am successful in my own career, I will definitely think about this gratitude and do the same for others.

The thesis film "BINI" that I completed for my degree program went on a very interesting journey. I premiered at numerous established film festivals nationwide and internationally, but the highlight of it all was when my film was a finalist for the Student Academy Awards. To be 1 of 8 films from 1,582 submissions around the world was a huge accomplishment that I will never forget and this was all because of the support I received from Film at Mason. 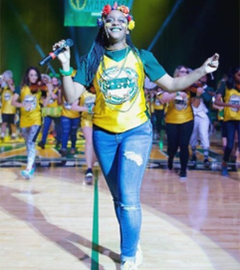 I don’t have a reason as to why I joined the Green Machine but I do have a reason as to why I am still here. Sophomore year of college, I almost had to let go of my collegiate career and the people of Green Machine were a big factor of why I stayed. To let go of an opportunity to grow and learn next to some of the most dedicated, talented and amazing students George Mason University has to offer would have been the worst decision I would have made in my entire life. Green Machine is an experience you won’t find at any other university. It’s a family unit. It’s a home. As a military brat I didn’t get to claim that word very often, yet I found that at Mason...through Green Machine. For that, I’ll be forever grateful.

I would not be in college without scholarships. Period. The Green Machine scholarship specifically was always there when I just fell short of my remaining balance. Just when I thought my academic career was done for, scholarships saved the day.