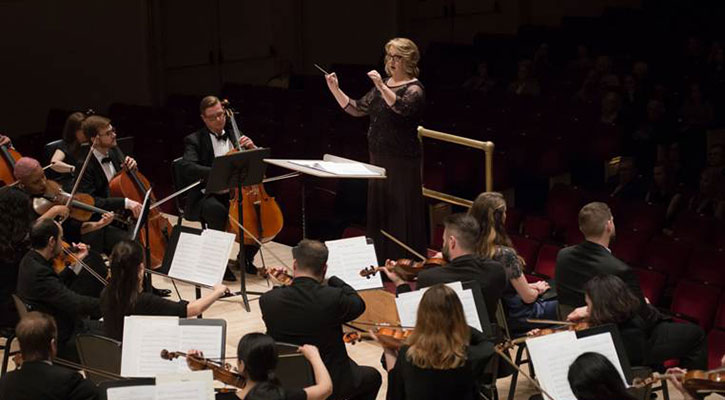 On Tuesday, May 28, voices rang throughout New York’s Carnegie Hall in a Requiem for the Living. Composed by Dan Forrest, the piece was commissioned and premiered in 2013 by The Hickory Choral Society in honor of the organization's 35th anniversary. This work has proven to be very popular, having received several hundred performances since its premiere just six years ago in Carnegie Hall.

“A Requiem, at its core, is a prayer for rest—traditionally, for the deceased,” said Forrest. “The five movements of Requiem for the Living, however, form a narrative just as much for the living, and their own struggle with pain and sorrow, as for the dead.” The fourth movement, “Sanctus,” offered different glimpses of the “heavens and earth, full of Thy glory,” and was inspired by images of space from the Hubble Space Telescope, and images of Earth from the International Space Station. The score provides these images as well as the resounding soaring of the oboe and harp in the beginning of the Sanctus with a movement that ends in full-orchestral complement and bright color.

“It was an honor and a privilege to represent George Mason University as a conductor on the stage of the famed Carnegie Hall,” said Dr. Billingham. “I am so pleased that many Mason students, alumni and friends took this musical journey through Dan Forrest’s Requiem with me. It was a weekend of discovery, musical connection and family.”

Dr. Billingham is a Professor of Choral Music Education at George Mason University. She is an active member of the American Choral Directors Association and a member of the Mason Faculty Senate. She has presented clinics and workshops throughout the US, Canada, South America, Italy, and most recently toured with members of the University Chorale to Nairobi, Kenya in spring 2019. She holds a DMA in Choral Conducting from the University of Arizona, an MM in Choral Conducting from the University of Missouri-Kansas City Conservatory of Music, and a BME in Choral Music Education from Indiana University.